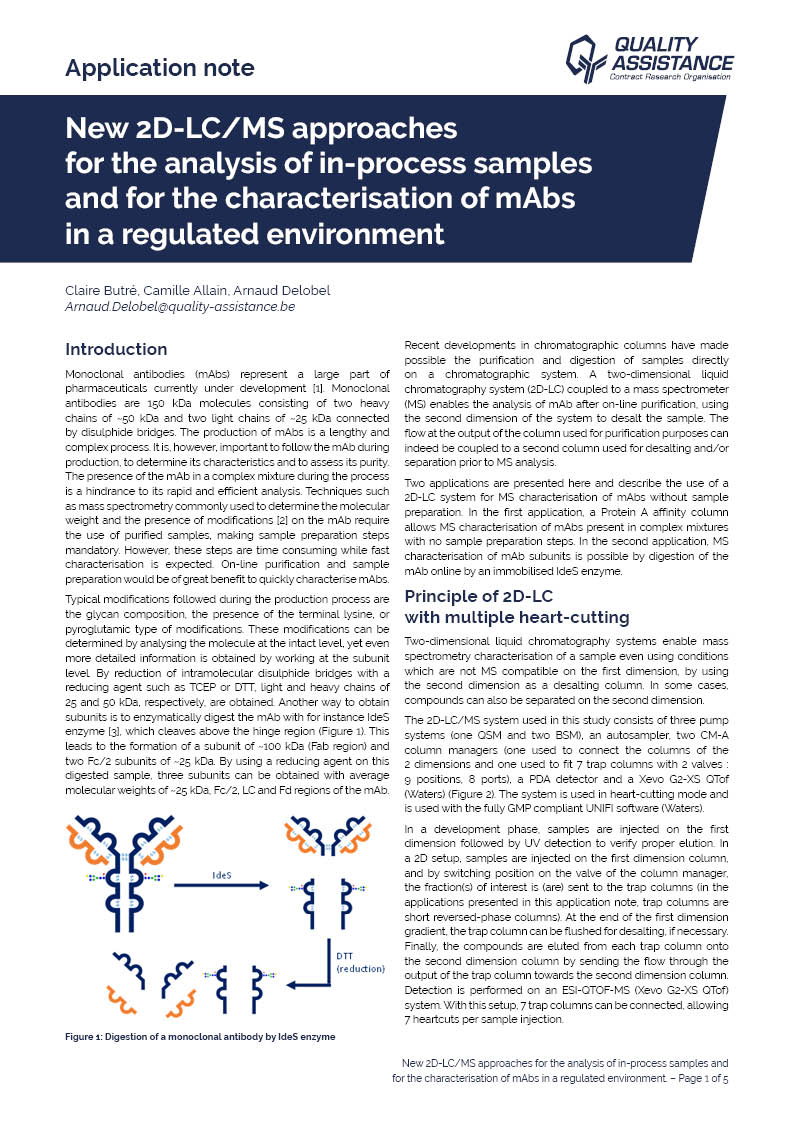 Monoclonal antibodies (mAbs) represent a large part of pharmaceuticals currently under development. Monoclonal antibodies are 150 kDa molecules consisting of two heavy chains of ~50 kDa and two light chains of ~25 kDa connected by disulphide bridges. The production of mAbs is a lengthy and complex process. It is, however, important to follow the mAb during production, to determine its characteristics and to assess its purity. The presence of the mAb in a complex mixture during the process is a hindrance to its rapid and efficient analysis. Techniques such as mass spectrometry commonly used to determine the molecular weight and the presence of modifications on the mAb require the use of purified samples, making sample preparation steps mandatory. However, these steps are time consuming while fast characterisation is expected. On-line purification and sample preparation would be of great benefit to quickly characterise mAbs.

Typical modifications followed during the production process are the glycan composition, the presence of the terminal lysine, or pyroglutamic type of modifications. These modifications can be determined by analysing the molecule at the intact level, yet even more detailed information is obtained by working at the subunit level. By reduction of intramolecular disulphide bridges with a reducing agent such as TCEP or DTT, light and heavy chains of 25 and 50 kDa, respectively, are obtained. Another way to obtain subunits is to enzymatically digest the mAb with for instance IdeS enzyme [3], which cleaves above the hinge region (Figure 1). This leads to the formation of a subunit of ~100 kDa (Fab region) and two Fc/2 subunits of ~25 kDa. By using a reducing agent on this digested sample, three subunits can be obtained with average molecular weights of ~25 kDa, Fc/2, LC and Fd regions of the mAb.

Recent developments in chromatographic columns have made possible the purification and digestion of samples directly on a chromatographic system. A two-dimensional liquid chromatography system (2D-LC) coupled to a mass spectrometer (MS) enables the analysis of mAb after on-line purification, using the second dimension of the system to desalt the sample. The flow at the output of the column used for purification purposes can indeed be coupled to a second column used for desalting and/or separation prior to MS analysis.