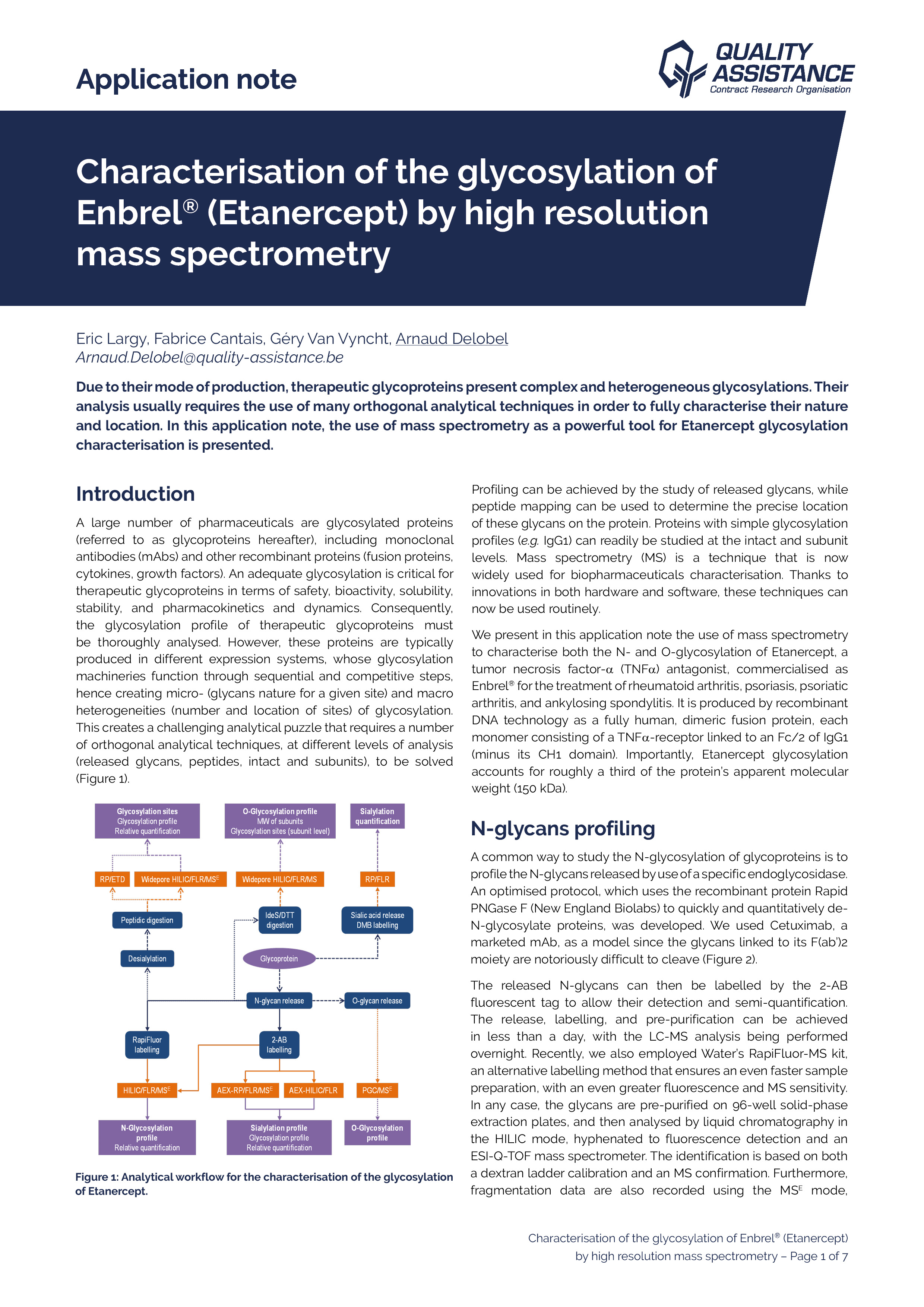 Due to their mode of production, therapeutic glycoproteins present complex and heterogeneous glycosylations. Their analysis usually requires the use of many orthogonal analytical techniques in order to fully characterise their nature and location. In this application note, the use of mass spectrometry as a powerful tool for Etanercept glycosylation characterisation is presented.

Using a comprehensive workflow, combining several analytical methods at the subunit, peptide, and released glycan levels, we extensively characterised the N- and O-glycosylations of Etanercept.

Profiling of the N-glycans was performed within a day using the RapiFluor-MS labeling kit (Waters), and is fully consistent with results from the literature. N-glycans identity was confirmed using an orthogonal mixed-mode AEX-RP column, which also gave access to the sialylation profile. This was further assessed using a short gradient on an AEX-HILIC column, yielding a single peak for each sialylation level.

O-glycan profiling was successfully achieved by carrying out a reductive β-elimination reaction that provided high release yields together with negligible peeling. Two core-1 glycans carrying one or two sialic acids were detected after PGC LC/MS, with high sensitivity and accuracy.

The overall sialylation was quantified by straightforward acidinduced release and DMB-labeling, from small amounts of Etanercept. The results were fully consistent with the N- and O glycosylation profiles determined previously.

Profiling of each of the three N-glycosylation sites was performed by widepore HILIC/MS, after triple-digestion of Etanercept, yielding short peptides. This stationary phase allows a complete resolution of glycosylated peptides vs. aglycosylated peptides, and CID MS/MS data provides a confirmation of the presence of glycans. We evidenced significant differences in the glycosylation of these three asparagines, the overall profile being consistent with what was found by released glycans analysis.

Discovery of the O-glycosylated peptides of Etanercept was performed following a modified protocol including a N deglycosylation and desialyation step, in order to generate short peptides carrying naked core 1 O-glycan exclusively. Targeted ETD fragmentation was subsequently performed to determine the O-glycosylation sites at the amino-acid levels. Out of the 89 putative sites, 13 were found to be glycosylated, with occupancies ranging from 1.6 to 100%.

Analysis of Etanercept subunits, generated by the IdeS enzyme, followed by N-deglycosylation and reduction, confirmed the presence of a maximum of 13 O-glycans, all on the TNFα receptor moiety. It is also a way to confirm the molecular weight of these subunits, which is normally challenging because of the important heterogeneity of Etanercept.

This comprehensive workflow is fully applicable to other glycoproteins, such as mAbs, ADCs, and other proteins produced by the recombinant DNA technology, using small quantities of sample, and in a reduced amount of time. Other analytical methods are available at Quality Assistance to complete the study of therapeutic proteins glycosylation, such as fucosylation relative quantification, and MALDI-TOF N- and O-glycans profiling.